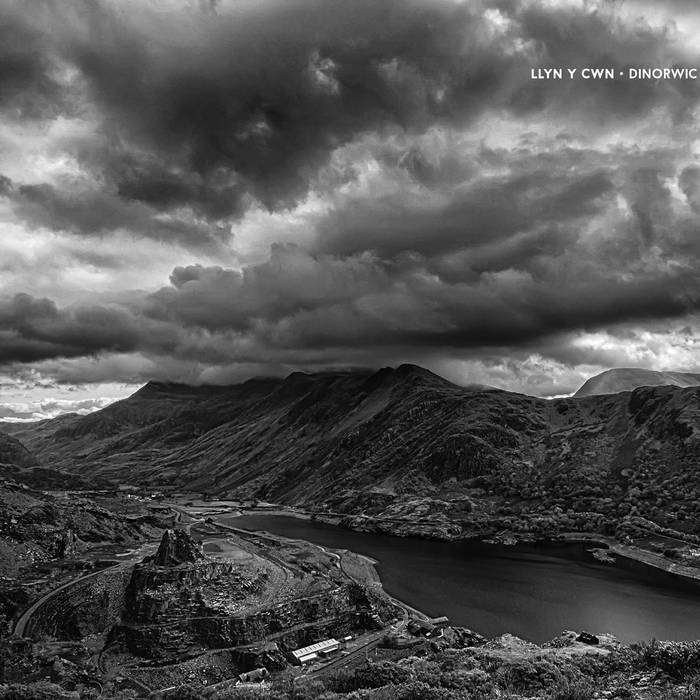 Dinorwic is the sound of nature re-establishing itself in the post-industrial wilderness of a former quarry, a hole within a void, a place defined by absence in a world of negative space.

The backdrop for this cavernous soundtrack is Dinorwic slate quarry, field recordings were taken in this vast subterranean environment where an exposed scar of rock is carved out of the mountainside on the western slope of Elidir Fawr in Snowdonia, North Wales.

Each track is named after an area of the quarry, descending ever deeper through each rock gallery, with their acoustically unique echoes and sounds. The landscape is in a state of constant flux with small avalanches of rock and spoil slate tumbling over itself - it was such a landslide that led to the eventual demise of the quarry. The hydroelectric power station, built deep underground inside the mountain, can be heard rumbling away through the various air shafts dotted around the quarry, adding to the overall ominous feel of the pieces.

“Dinowic shows Powell coming into his own as a great dark ambient artist- as through-out the album we find a wonderful mix of vast drones, creepy-but- subtly harmonic ambience, and grimly mood-yet-very well placed & processed field recordings. Added to this we of course have the great & grim monochrome pictures, and the theme of an abandoned village & deep dark mine…all making this one of the more memorable & worth revisiting dark ambient albums in many a moon.”
Musique Machine

“....feels like an abyssal sensation, which says something about the visual strength of the album. Overwhelming sound waves often characterized by buzzing noises are leading the listener into a perpetual state of stupor. “Braich” is the absolute masterpiece of this sonic exploration.”
Side-line.com

“An album that has nothing to envy to many of the works of the great father of this genre, Lustmord , both in form and content.”
NOmelody Magazine

“Dinorwic could easily be named after dozens of sites across Dorset, Cornwall, Derbyshire, Yorkshire or anywhere that was once home to industry and now isn’t. It speaks more about the history and cultural identity than 100 punk albums.”
VITAL zine

“Almost minimalist in its sonic dimension, this sound curtain will dominate its musical structure until everything languishes, and dissolves in time and space. “Dinorwic”, a new masterpiece…”
LuxAtenea.com

“..everything comes together to create a cinematic soundscape, one in equal parts disquieting and peaceful…. Dinorwic really celebrates the land that it comes from by putting it first and foremost”
NineCircles.co

Llyn Y Cwn (Welsh - lake of the dogs) is a small lake at 715m in the Glyder mountain range of Snowdoina, North Wales.

Ben Powell has been making electronic music for over 25 years, drawing inspiration from his native North Wales landscape and his participation on Arctic research cruises, Llyn Y Cwn is a field recording based dark ambient project with focus on atmosphere and environment. ... more

Bandcamp Daily  your guide to the world of Bandcamp